The Damascus Volunteer Fire Department was first organized in 1944 by men from the Damascus community. At that time the chief was D.T. Callahan, Assistant Chief was M.J. Beitler, Vernon Delzell was Captain with Lester Ramsayer Lieutenant and Myron West as Secretary. The first apparatus was a Scout car which in 1945 they fitted with a 500-gallon water tank and pump which was borrowed from the government. Donations from citizens and the surrounding community were collected to purchase other needed equipment.

On January 9, 1947, the department was incorporated. The trustees were M.J. Beitler, H.O. Stanley, M. L. Hans, Alton Bye and Ralph Davis. The department held several fundraising events including basketball games, fall festivals and turkey suppers along with contributions from the generous citizens of Butler and Goshen Townships, the department raised $21,332.00 to purchase much needed equipment.

In 1957 the Citizens of Butler and Goshen Townships voted and passed a half mill levy which would be used to operate, maintain, and purchase new equipment as needed.

By the end of 1957 the members of the department realized they needed to build a proper building to house their equipment currently being stored in part of Bauman’s Auto Service’s garage owned by the fire chief William J. (Pappy) Bauman Sr. Bauman was chief from 1951 until he retired in 1977.

In 1958, Ray and Elizabeth Pearce donated a piece of land on the northwest corner of French and Third streets in Damascus. This would become the new home of the Damascus Volunteer Fire Department. In 1959 the fire station construction was completed. Over the years, the station was home to several apparatus; 1952 Ford pumper; 1955 Jeep; 1962 Ford high pressure and volume pumper; 1968 Chevrolet carryall; 1969 Ford Bean high pressure pumper; 1974 Dodge mini-pumper; 1981 Ford high pressure volume; and a 1978 Jeep pickup which would become the grass fire truck.

Joe Bogar Donated a one-acre tract of land with a building in memory of his parents along with a generous monetary donation. This tract was in the northeast section of Goshen Township near the intersection of Stratton and South Range roads. This facility which Joe intended to become a sub-station for the fire department was renovated and fitted with a restroom and other amenities to clean and maintain and store department equipment. This facility would later become known and Damascus Fire Station #2.

In October 1978, the membership of the fire department started the Emergency Medical Service division. The first ambulance was the 1968 Chevrolet carryall converted to suit their needs for patient transport. The 1976 Dodge mini-pumper was repurposed as a pumper- heavy rescue combination. 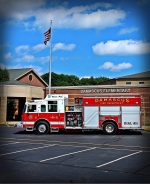